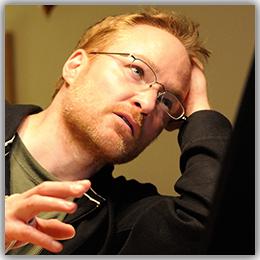 Joseph Hellweg (Ph.D., 2001, University of Virginia, Anthropology). I am a cultural anthropologist with interests in religion, Islam, politics, performance, and health in West Africa, where I have done over five years of fieldwork—in Côte d’Ivoire, Guinea, and Mali. I speak French and Manding fluently and have acquired basic reading and writing competence in the N’ko alphabet for writing Manding.

My research has focused on social movements organized around or in tandem with religious practices and ideologies. I have written extensively on Benkadi, the dozo hunters’ security movement of Côte d’Ivoire. More recently, I have begun to explore a literacy and healing movement in Guinea and Mali centered on the use of an alphabet called “N’ko,” invented in West Africa in 1949.

In my teaching, I attempt to bring to awareness the implicit cultural categories that organize daily life, especially in Africa and the United States. I also train students in the theoretical and methodological approaches necessary for an empirical understanding of and engagement with these categories in their academic and everyday lives.

I am currently preparing a book manuscript titled, Practical Religion: Hunting, Islam, and the Poetics of Action in the Songs of Dramane Coulibaly. The project examines the praise-songs and heroic epics that dozo hunters sing in Côte d’Ivoire. These songs witness to a flexible religious ideology that stands astride Islam, local hunting rites, and contemporary national politics in ways that offer an alternative to the divisive ethnic politics that have divided Côte d’Ivoire during nearly a decade of conflict from 2002 to the present. The songs of my dozo host, Dramane Coulibaly, will form the core of the book.

I am now completing an article in French titled, “This Is Not a Militia: Dozos, Violence, and the State In Côte d’Ivoire.” It will offer a critical analysis of claims (and their potential consequences) that dozo hunters constituted a militia in western Côte d’Ivoire during recent electoral violence in 2011. The article is based on a paper that I presented in French at the Institut d’études politiques (Sciences-Po) in Paris in June 2011.

I am writing another article updating dozos’ recent involvement in conflicts in Côte d’Ivoire for a special issue on youth, war, and militias for the Italian journal, La ricerca folklorica.

2012. Côte d’Ivoire Is Cooling Down? Reflections a Year after the Battle for Abidjan.
I compiled, edited, and contributed two pieces to this collection of seventeen brief essays on current, recent, and historical conditions in Côte d’Ivoire. The essays pay particular attention to the post-electoral violence of 2010-2011. The collection appears as one of the “Hot Spot” features on the website of the journal, Cultural Anthropology.

Forthcoming. “Reading Urbanity: Trans-Urban Assemblages in the N’ko Literacy and Healing Movement of West Africa,” in Living the City (edited collection on urbanization in Africa), to be published by Lit Verlag, Berlin.

2009. “Hunters, Ritual, and Freedom: Dozo Sacrifice as a Technology of the Self in the Benkadi Movement of Côte d’Ivoire,” Journal of the Royal Anthropological Institute (N.S.) 15: 36-56.

Media Coverage of My Work on Dozo Hunters

2011. “Comment on Ivory Coast, Disarmament, and the Dozos,” Council on Foreign Relations, My Posting on the Blog of Amb. John Campbell.