The Charles Wellborn lecture in American Religious History is delivered every other year. It was established in 2008 through a gift from a former faculty member of the department, Charles Wellborn, who also served for twenty years as Dean of the FSU Overseas Campus in London. The inaugural lecture in 2010 was delivered by Daniel Walker Howe, winner of the 2008 Pulitzer Prize in History.

The John Priest Lecture has been established by a generous gift from Gloria Priest in honor of the life and work of John Priest (1929-1998). John served as

Professor in the Department of Religion at Florida State from 1968 until his retirement in 1996, at which time he was named Professor Emeritus. While at FSU, John also served as Director of the Graduate Humanities Program (1969-1976) and Chair of the Department of Religion (1978-1984.) John was a founding member of the American Academy of Religion, which he served as national secretary, vice president, president (in 1967), and executive director and treasurer (1967-1978.) Professor Priest received his AB from Asbury College in 1949, his BD (1955) and Ph.D. (1960) from Drew, and was honored with a variety of fellowships including the Kent, Fulbright, Dempster, and Lilly Fellowships. Prior to coming to FSU, John served on the faculty at Ohio Wesleyan, the Hartford Seminary Foundation, and was Academic Dean at Hartford from 1966-1968. 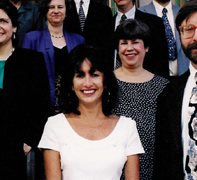 During the 2015-16 academic year, the Department of Religion will celebrate 50 years of the study of religion at FSU. Since

1965, the mission of the department has been to promote research and instruction designed to increase understanding of the many ways in which religion impacts human life. Throughout the coming academic year, the Department will sponsor a variety of events.