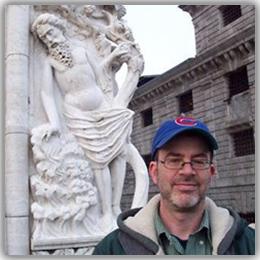 I joined the faculty of the FSU Religion Department in Fall 2005. I offer courses in Hebrew Bible and Second Temple Judaism. I completed an M.T.S degree in 1997 at Harvard Divinity School and I finished my Ph.D. at the University of Chicago in 2002. I studied under John Collins and wrote a dissertation on 4QInstruction, the longest wisdom text of the Dead Sea Scrolls. This document is the best example available of a sapiential text with an apocalyptic worldview. Working on this composition developed my interest in the intersections between the wisdom and apocalyptic traditions in early Judaism.

I was awarded a grant from the Humboldt Foundation (Forschungsstipendium für erfahrene Wissenschaftler) and spent the 2013-14 academic year at Ludwig-Maximilians-Universität in Munich, Germany, working on a book on giants in ancient Judaism.

Prof. Goff is co-organizing an interdisciplinary conference on the Dead Sea Scrolls and the Nag Hammadi codices, with Dr. Dylan Burns (Freie Universität Berlin). It takes place in Berlin on July 20-22. For more information, see here.